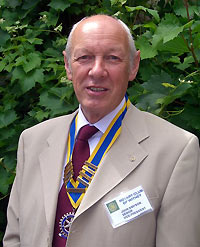 John Simpson, one of the founders of BBC Radio Oxford, has been elected to serve as President of the Rotary Club of Witney. John enjoys living in West Oxfordshire, he grew up in Charlbury and attended Chipping Norton School. He has lived in Witney for 25 years.

For over 20 years at Radio Oxford John presented a wide range of programmes from across Oxfordshire, including the countryside series Countrywise, Linger Awhile for older listeners, and the very popular Hello series visiting people in local towns and villages. Not to forget his regular weekl;y spot with gardening expert Ron Bateman!

For ten years he was the Radio Oxford co-ordinator for Children In Need during which time he estimates over a million pounds was pledged by listeners to the station.

I joined Rotary said John to continue contributing to the local community, and will encourage the club to persevere with the same. Our club activities reach out to many of the people in the area, from the young with the annual Teddy Bears Picnic, to the old with the Seniors Concert. Most importantly we are ready to help when misfortune strikes.

John is no stranger to voluntary work. He first became involved in local broadcasting in 1965 when, as the founder chairman, he led the team setting up and launching Radio Cherwell, the very successful Oxford Hospital Radio Station.

I seem to have spent many years involved in local affairs said John the secret is to enjoy what you are doing and enjoy the company of the people around you. That provides a good base from which to help others. Fortunately that exactly describes the strength of the Witney Rotary Club