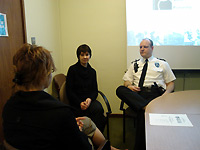 A joint operation between Thames Valley Police and West Oxfordshire District Council to combat illegal underage sales of alcohol took place last Friday, 8th December. Young people and alcohol have been identified as an emerging priority by communities across the district and this operation was designed to address the issue.

Six licensed premises in Witney, Long Hanborough, Woodstock, and the Wychwoods were visited by the Neighbourhood Police Team along with Licensing Officers from the Council. Three young people were involved and at each premises they attempted to purchase alcohol.

Four premises served them and at three premises fixed penalty notices for ï¿½80 were issued and advice was given. The fourth premise is the subject of further enquiries.

Over 400 licensees were contacted earlier in the year and advised that operations would take place to give them the opportunity to review their processes to prevent young people purchasing alcohol.

Sgt Scott Evans who was in charge of the operation, said: "I'm disappointed that four of the six premises sold alcohol to young people. We intend to carry out these operations across the district during the next year as one of the emerging priorities and concerns for the public are 'Young people and alcohol'. A number of neighbourhood police teams have been tackling this issue; seizing alcohol and using anti-social behaviour powers (ASBOs) with the most persistent offenders."

Cllr Barry Norton, Leader of West Oxfordshire District Council and Cabinet Member with responsibility for Licensing and Community Safety said: "The Nightsafe scheme in West Oxfordshire has made a significant impact and been a huge success. This is the third undercover operation and a total of 25 premises have now been tested with nine being prosecuted for selling alcohol to underage people. The majority of licensees in the district are responsible and work with the police and licensing officers to tackle crime and disorder. We will continue to work with them in order to prevent unlawful sales which can lead to problems on our streets."

Photo Caption: One of the test purchasers being briefed by Sgt Scott Evans and Michelle Aston from WODC.