Councillors back balloon and lantern ban 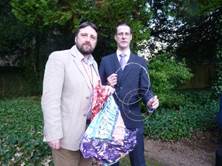 The release of sky lanterns and helium balloons from West Oxfordshire District Council land could be banned after Cabinet members backed the proposal.
Cllr Andrew Coles and Cllr Toby Morris with helium balloons and sky lantern remains
Having reviewed a range of evidence suggesting the potential harmful effects of lanterns and balloons to wildlife and livestock along with the fire risk, councillors supported the move.

Cllr Toby Morris, Deputy Leader of the Council, said: There is growing evidence of the dangers to wildlife and the environment presented by the use of these apparently harmless items, the use of which has grown in recent years.

We are sending a statement that highlights these risks and hope residents will follow our example and prevent their use.

As well as the recommendation to not allow the release of balloons and sky lanterns on land owned or controlled by the Council, officers will be asked to contact Town and Parish Councils in the District asking them to introduce the policy on their land.

Cllr Andrew Coles, who sits on the Councils Environment Overview and Scrutiny Committee, added: I am delighted this recommendation has gone forward and look forward to the policy being enforced in the near future.

The recommendation was made at the Cabinet meeting on Wednesday 10 January. All decisions made by the Councils Cabinet are subject to the usual 10-day call-in period.