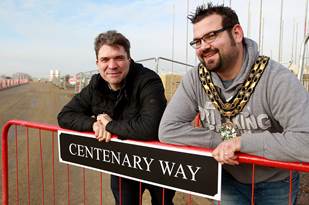 A new housing development in Witney will feature streets named after individuals who have had a major influence on the town.

The West Witney scheme, the first phase of which is now under way, will see about 1,000 homes built in an attractive tree-lined setting.

Now, following consultation with Witney Town Council and the help of Witney historian Stanley Jenkins, the names of the streets can be revealed with all, barring Centenary Way which marks 100 years since the end of World War One, commemorating figures interweaved with Witneys history.

They include Mary Box Crescent - Mary Box co-founded Henry Box School with her husband Henry; Mott Close after Edward Mott who was awarded the Victoria Cross serving with the 1st Battalion, Border Regiment in World War One and Rayson Lane after Thomas Rayson, the architect responsible for both the central Witney and Newland war memorials and site engineer with Witney Aerodrome.

Cllr James Mills, Leader at West Oxfordshire District Council, said: Many of the names will be familiar to local people as they are of individuals in living memory who have made a major contribution to the town.

This is a wonderful way of commemorating their efforts and will ensure they continue to be familiar to future generations.

The 73-hectare West Witney development will include a new primary school, space for a secondary school, a neighbourhood centre with shops, a free car park and potential for other amenities.

A minimum of 30 per cent of the housing will be affordable and provision is made for an 80-unit extra care home, comprising of 40 affordable units.

There will be significant highway improvements as a result of West Witney while developer-funded contributions will go towards West Witney recreation ground (£250k) and the Corn Exchange (£100k), as well as town centre and car parking improvements (£250k) and public art (£100k).

Planning permission subject to Section 106 and 278 agreements with developers was approved by West Oxfordshire District Councils planning committee in March 2013.

The development is a key part of both the Councils existing and emerging Local Plans.

Townsend Road  A W Townsend of Manor Farm, Curbridge, was Deacon of Cote Baptists Church in 1910 and Townsend is a prominent name for Curbridge

Winfield Drive  The Winfield family lived in Manor Farm which forms part of the site of the development. William Winfield purchased the Farm in 1939

Mott Close Edward John Mott served with 1st Battalion, The Border Regiment and was awarded the Victoria Cross for capturing a German machine gun placement at Le Transloy, France in January 1917. He lived at New Yatt Road, Witney and died in 1967

Clare Place  Lieutenant Colonel Fred Clare MBE DCM was born in Witney in 1889. He rose through the ranks, serving for 40 years with the same regiment and was awarded the Distinguished Conduct Medal during the First World War