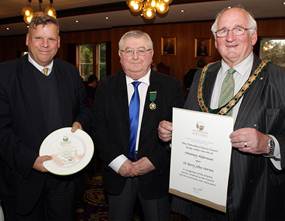 Sir Barry is the first councillor in the district to receive the ceremonial title since the district was formed in 1974. It was awarded to him at a special meeting of the Council on Wednesday.

Sir Barry said: My family and I have been really moved by the kindness we have been shown. It has been overwhelming.

"To have received such an honour is something I shall treasure."

The idea of awarding Sir Barry with the title was first mooted by Cllr Julian Cooper after it was announced that he would be standing down as Leader and councillor for North Leigh in April.

Liberal Democrat leader Cllr Cooper paid tribute to Sir Barrys achievements during his 15 years as leader including the establishment of leisure centres in Witney and Chipping Norton and new halls in villages including Standlake and North Leigh.

He added: I am delighted to have put this motion forward and hope Sir Barry will continue to attend as many civic functions as possible.

Council Leader James Mills said: I have the greatest appreciation for everything Sir Barry has done and the way he always put West Oxfordshire first and foremost. He is a very difficult act to follow.

Cllr Andrew Coles of the councils Labour Group added: Sir Barrys contribution to this Council and the wider community is highly significant and warrants this special award.