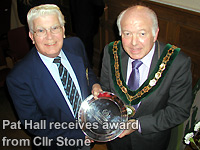 In 1966 Mr Hall became a founder member of Witney Rugby Club. Since then he has represented the Club on the Oxfordshire County Rugby Football Union (CRFU) committee. In 2004 Mr Hall initiated the Training Rugby's Youth (TRY) Scheme and has devoted much of his time to junior rugby development in clubs and schools.

The Award for Outstanding Achievement was presented by Cllr Keith Stone, Chairman of the District Council. Commenting on Mr Hall's achievement Cllr Stone said: "Pat is a real inspiration and has worked tirelessly for Witney Rugby Club over a long period of time. He has played a key role in the continuous development of rugby in Witney and beyond."

Commenting on his award Mr Hall said, "I am, of course, delighted, although I regard it as being just as much for Witney Rugby Club and the way it approaches youth development. I'd like to thank Brita Water Filter Systems, West Oxfordshire District Council and Cherwell District Council for supporting the TRY scheme. This scheme now covers much of North and West Oxfordshire and we are in contact with about 90 schools."

Mr Hall was presented with his award at the Council's Annual Achievement Awards ceremony.

At the ceremony 43 successful applicants gained Achievement Awards to help them further their artistic or sporting aspirations.

Of the 43 award winners, five were recognised for demonstrating excellence and were given awards to help with expenses. The sports high achievers they are Elysia Ridley from Ascott-under-Wychwood who is aiming to take part in the 2008 Olympics in Triathalon. Altanta St John from North Leigh has recently represented Britain in the under 23 Rowing team. She is aiming to reach the 2012 Olympic Games.

The High Achievers for the Arts are Robin Furlong from Enstone, who designs and makes bespoke furniture. Katy Hamilton from Enstone is a phenomenally able pianist and is studying at the Royal College of Music. Brodie Ross from Salford is studying at the Guildhall School of Music and Drama and his acting credits include the Royal Shakespeare Company and the RSC Fringe.

The Sports Person of the Year was awarded to Mr Chris Drinkwater from Combe Junior Sports. Originally a football manager, Chris has now become the driving force behind coaching, managing, fund raising and developing cricket and football in Combe. He has secured funding for mini and full size football goals, artificial cricket pitch, sight screens and numerous amounts of playing and training equipment.

Jean Kloos from the Leys Badminton Club in Witney is this year's Coach of the Year. She has been involved with the Leys Club for over five years delivering junior coaching at all levels. She has helped to raise the membership so that it is now the largest badminton club in Oxfordshire.

During the evening a special award was made to the West Oxfordshire Girls Hockey Team who won the gold medal at the First Oxfordshire Youth Games in July.

Cllr Tony Walker, Cabinet Member for Leisure and Tourism said, "These awards demonstrate the wealth of talent we have in the District. During the last 12 months, Alex Scotcher, one of our former Achievement winners, was part of the team that won gold in the 200m swimming relay team at the Commonwealth Games. Gugu Mbatha Raw is now in great demand for TV and theatre work, recently appearing in Spooks for the BBC."

"We are pleased to provide financial support and public recognition for up-and-coming sports and arts performers in West Oxfordshire."