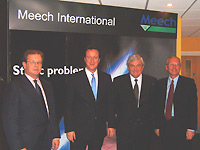 "It was a pleasure to meet David Cameron." says Chris Francis. "He showed a genuine interest in the issues faced by UK companies both in terms of the challenges we face as a manufacturer and exporter but also recognised the important contribution the plastics industry makes to the UK economy."

Background Information
Meech International manufactures and supplies static control equipment to an international market. Headquartered in Witney, Oxfordshire, the company now has offices in USA, Belgium, Hungary and China and a comprehensive range of distributors and agents throughout the world.

Data Plastics was established in 1990 as an importer and distributor of American made plastic protection parts, it rapidly became a manufacturer of both standard parts such as caps and plugs and of custom mouldings by the acquisition of other moulding businesses.

The British Plastics Federation is the leading trade association of the UK Plastics Industry representing 80% of Industry turnover. BPF Membership encompasses over 600 companies from the plastics industry supply chain, including polymer producers, suppliers and processors in addition to additive and machinery suppliers and manufacturers.